Moments Worth Making with Stella Artois

It’s all about reminding and inspiring consumers to find a connection in these moments together. 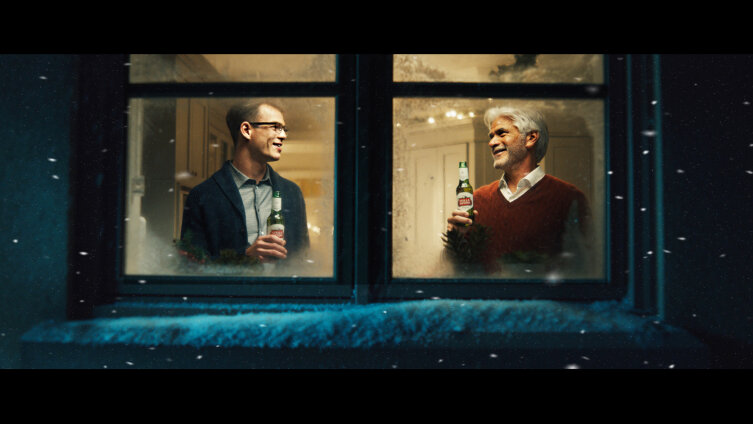 
Please provide us with an overview of the campaign’s creation. What message are you conveying about the brand and what was your role in the process?

This year, we really wanted to focus on the moments that bring us closer to one another throughout the holidays.

The campaign officially kicked off in November with our new television ad, titled “Moments Worth Making,” which illustrated a heartwarming exchange between a father and son. It focuses on the pair finding unexpected joy while working together to accomplish a familiar holiday chore. As the years progress, we see that this simple, unassuming moment transforms into a cherished tradition between the two. It’s all about reminding and inspiring consumers to find a connection in these moments together.


Most recently, the campaign showcased a second piece of content titled “Neighbors” - a docufilm that shined a light on the relationships between those that live closest to us, our neighbors. Our inspiration originated from a study that revealed that less than 31 percent of Americans admit to knowing their neighbors. So, we partnered with documentarian Tatia Pilieva to capture what happens when neighbors, who are strangers, meet for the first time. We released this just before the Thanksgiving holiday in hopes of inspiring people to reach out and get to know their neighbors better.

My role was to ensure that we were creating a cohesive narrative and that the heart of our campaign message and mission carried through all elements. The passion behind this effort was evident not just internally, but with all the partners that we worked with and this was especially heartwarming for me.

Was the brief for this holiday campaign any different than the usual? What challenges did that present?

For “Neighbors” specifically we had to take a different approach, because we were creating something with real people and telling real stories. Rather than using actors and a script, we felt that we were really able to tap into and capture an authenticity by using actual neighbors who didn’t know each other.

What inspired you to approach the campaign this way?

Creating moments that bring people together is something that Stella Artois has long stood for, and rallying around that concept during the holiday season just makes it more impactful. In addition to the content we’ve shared throughout the season, we also created tangible products and experiences to engage with our consumer.

First, Stella announced the creation of our first limited-edition holiday beer - Midnight Lager. In October, to celebrate the news, we unveiled the new beer to Sleepy Hollow, New York, bringing an entire town together in the spirit of Halloween as they received a first taste before Midnight Lager hit shelves on November 4.

Secondly, and as a companion to “Neighbors,” Stella produced the Stella Together Holiday Sweater Pack - a custom pack that cradles two beers in a red knit button-down sweater, and includes a cleverly designed two-piece magnetized bottle key that only works when both parts come together.

What’s a “behind the scenes” story that only you know about?

While creating “Neighbors” we were genuinely touched by the bonds we were able to help facilitate through this process. For example, Jake and Leroy, two neighbors profiled in the docufilm, met on set for the first time and now have a standing karaoke night in their neighborhood!

Will family values continue to be a theme in Stella Artois advertising in 2020?

As a brand passionate about fostering more meaningful moments and connections, Stella Artois will continue to inspire to bring people together in 2020.

What is Stella Artois’s market share in the US and who do you see as your main competitor brands?

Originally brewed as a holiday gift for the town of Leuven, Belgium, Stella Artois is a super premium lager that makes any occasion more special. According to IRI, Stella Artois has a 0.66% volume share of the beer category YTD. Our main competitor brands are other premium imported beers, including Heineken, Corona, and Modelo. (YTD 11/24/19, IRI TUS MULC)

For years, two of my girlfriends and I always have set a night during the holiday season to do a gift exchange and spend time together.  It has nothing to do with the gift but it has always been a set moment to find the time to spend together.  Over the years it has evolved, from just us to boyfriends to husbands and now with lots of kids and so while things have changed, the moment has always been special and it becomes something that we always hold dear as we know it is a tradition worth saving.

We know our consumers have a lot of love for our brand but tend to more likely drink Stella on special occasions. Throughout 2019, we focused on positioning Stella as a beer that helps make any moment more special, not just during a special occasion that you might wait for all year long. In 2020, you’ll continue to see us share this message, always in the effort to inspire people to savour life together.