Tell us a bit about yourself and your role in the creation of this work.

I’m a Director and Photographer for creative agency RANKIN, and I’m represented by production house The Graft – both of which are headed by the afore mentioned British photographer and cultural provocateur.

My background is largely in beauty, fashion, and music videos, so obviously this project was a refreshing change. It allowed me to bring a punchy and energetic aesthetic to a hugely important topic.

At the agency we always say we ‘want to change the world’, so when this project was placed in front of me it was an absolute no brainer. Plus, I was thrilled to have the chance to work alongside the fantastic team at RANKIN, the incredibly hardworking supporters of XR and Richard Curtis himself.
It was an incredible opportunity.

When looking at this project's script, was there anything in particular that caught your attention?

There were a couple of things that caught my eye when I first read the script for this project.

First of all, it clearly stated XR’s message, asking the simple but essential questions – Where Is Your Plan for the future? We’ve declared a climate emergency, Now What? This is something I felt had become slightly lost in the rebellion due to some of the recent PR angles and news stories discussing the organization. I saw this as a chance to really strip it back and focus on the crux of the issues at hand.

Secondly, I loved the idea of shooting someone from every generation. It was the physical manifestation of the idea that we have one lifetime left and that this crisis will affect us all – young and old, famous and non-famous.

It’s such a clever way of bringing everything full circle.


What do you think it was about this campaign that made you the top choice to direct it?

I think every director brings their own unique voice to a project. But with my background in music videos and fashion films I knew I would be able to inject this campaign with a different level of energy.

From the outset we decided that this couldn’t be a regular PSA or environmental film; I really pushed to create something that would surprise people. This is a topic that we should be screaming about, so I did everything possible to make a campaign that would leap off the screen.

This is why we spent about fifty percent of our time capturing performance B-Roll of all the featured talent. While the dialogue is hugely important, dynamic visuals are what I felt would create a long-lasting impression.
We wanted to grab people’s attention with a raw, unfiltered attitude.

Can you share with us any alternative ideas (if any) you had for approaching this campaign? Why was this idea chosen?

Initially, we were going to take the whole video on location to break up the traditional idea of a studio shot PSA. But when the caliber of names started rolling in, it was clear we needed an environment where we could control all the elements. Plus, it started pouring with rain on the shoot day, so we definitely made the right decision!
I’m pleased that we shot some elements on location to really emphasize the narrative of the story and bring everything back to the physical world around us.

How well did the information flow between the client and yourself on this job? How would you describe working with them?

We were in constant communication, we had to be. On a project like this (which came in at the eleventh hour) honesty, speed and a focus on collaboration will help everything run smoothly.
Funnily enough the client never really felt like a client. It was a project where everyone pitched in to make it happen. XR helped source for the art department - they even jumped into 1st AD as well! To get that on a shoot is really rare. It shows a commitment to the message that we’re trying to get out there. back to the physical world around us. 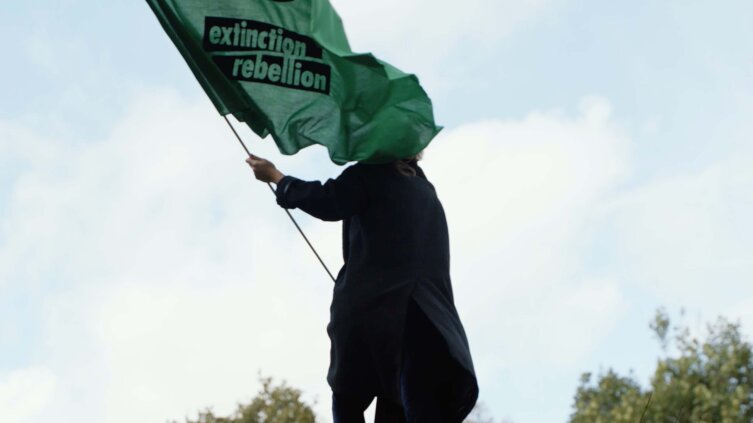 What was the greatest challenge that you and your team faced during filming?

Like many projects, this came to fruition at the last minute. So, the biggest challenge was a lack of time to prepare. It meant that we had to have a clear idea of our intention and the finish point of the film in mind at all times whilst remaining flexible to respond to challenges on the day.

This was an incredibly fast paced shoot. We shot over twenty-people in an eight-hour span, which is pretty impressive. We also didn't know who was going to show up or when. The ask had gone out a day or two before for people (both famous and non-famous) to appear in the film. We had a gauge on a few names that would turn up but when we got rolling it was fast and furious. The task when shooting so many people in one day is retaining creative integrity whilst keeping on schedule and responding to the changes as they came.

Can we expect more from this campaign in the future?

Never say never. You never know what the future holds. The climate crisis is a hugely important topic right now – one that is not only going to shape our future environmentally but one that is going to change the landscape politically too. Especially with the upcoming General Election. With a campaign like this you never know how it is going to develop or evolve over time as the socio-economic and political sands shift.

Global collective Makers is breaking the traditional modes of production

LCA is leading the charge for green productions